Bothell WA, – 21 July 2020 – Tethers Unlimited, Inc. (TUI) is pleased to announce that
Spaceflight Inc. has selected TUI’s NanoSat Terminator Tape Deorbit System for end-of life disposal of its new Sherpa-FX orbit transfer vehicle. As part of an upcoming mission, Spaceflight will test the deorbit process with the Terminator Tape. When the orbit transfer vehicle’s mission is completed, a timer release system will deploy the Terminator Tape to rapidly deorbit the Sherpa-FX vehicle so that it does not contribute to the growth of the space debris problem.

“When Tethers was founded in 1994, its main focus was to solve the problem of space debris so that NASA, the DoD and commercial space enterprises could continue to safely operate in Earth orbit, “says Dr. Rob Hoyt, TUI’s President.

“We are pleased to see our solutions are now making a significant contribution to ensuring sustainability of the space environment, which will benefit the entire industry.”

Within the last decade, space debris has become a growing concern to the space industry, with government agencies imposing strict requirements upon satellite operators ensuring that their spacecraft will be disposed of properly. According to the European Space Agency, as of February 2020, the number of debris objects estimated by statistical models to be in orbit are as follows:

The Terminator Tape is a small module, weighing less than two pounds and about the size of a notebook, designed to attach to the exterior of a satellite. When the satellite has completed its mission and is ready to be disposed of, an electrical signal from either the satellite or an independent timer unit activates the Terminator Tape, causing it to deploy a 230-foor long conductive tape from the satellite. This tape interacts with the space environment to create a drag force on the satellite that lowers its orbit far more rapidly than it would if it were simply abandoned in orbit.

“We’re focused on being a good steward of our space resource, and our mission is to conduct frequent small satellite launches, so we have a responsibility for deorbiting what we send up,” says Philip Bracken, vice president of engineering at Spaceflight Inc. “Tethers’ solution is affordable, compact, and lightweight and will help us fulfill our responsibilities to clean up space after our mission is complete.”

You can also view our article on: 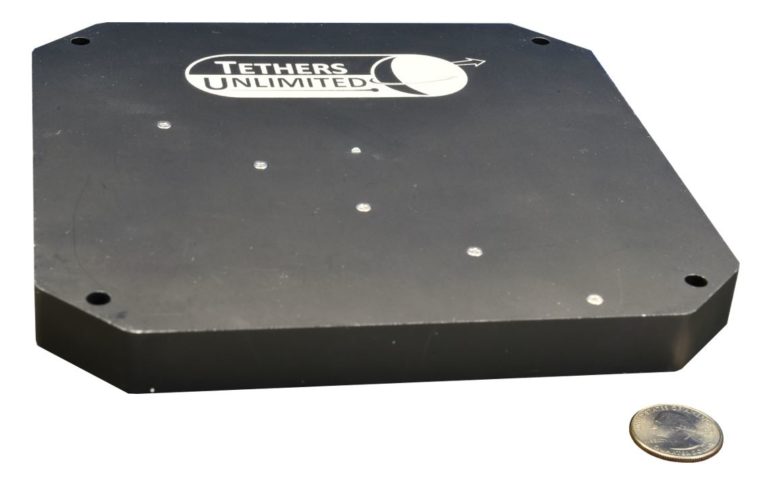