WASHINGTON — Tethers Unlimited is designing a satellite servicing vehicle that would leverage technologies developed for the U.S. Defense Department and NASA to service spacecraft in low Earth orbit. Tethers Unlimited already has many of the technologies needed for the servicer either completed or in development under Small Business Innovation (SBIR) grants, CEO Robert Hoyt told SpaceNews.

By combining these technologies, the company hopes to have a servicer called LEO Knight in orbit within three to four years, he said. The servicer would support on-orbit assembly, refueling for small satellites and other functions, he said. Tethers Unlimited is focusting on the small satellite market in low Earth orbit, targeting spacecraft too small to be economically serviced by robotic spacecraft like the one being developed under the U.S. Defense Advanced Research Agency’s Robotic Servicing of Geosynchronous Satellites (RSGS) program, Hoyt said. A 100-kilogram LEO Knight servicer would weigh 180 kilograms fueled, he said. “Its smaller size and lower cost will make it economically viable for missions such as refueling small, low-altitude satellites, removing derelict smallsats from constellation altitudes, assembling ESPA [EELV Secondary Payload Adapter] payloads to create persistent space platforms, and delivering and integrating payloads onto those platforms,” Hoyt said by email.

LEO Knight servicers will use an advanced version of a robotic arm, the development of which started in 2011 with the U.S. Naval Research Laboratory. Hoyt said the “Kraken” arm began as an offshoot of NRL and Space Systems Loral’s (now Maxar Technologies) work on a larger robotic arm for a satellite servicing project called SUMO, the Spacecraft for the Universal Modification of Orbits, which dates back to 2002. For the past three years, Tethers Unlimited has been developing a version of Kraken through a NASA SBIR that would enable teleoperation of experiments on board the International Space Station, Hoyt said. Now the company is working with the Air Force through another SBIR to mature a variant called Kraken-X that would support small satellite servicing and assembly missions, he said. Hoyt said the first LEO Knight will likely have just one robotic arm, though subsequent services could carry two. 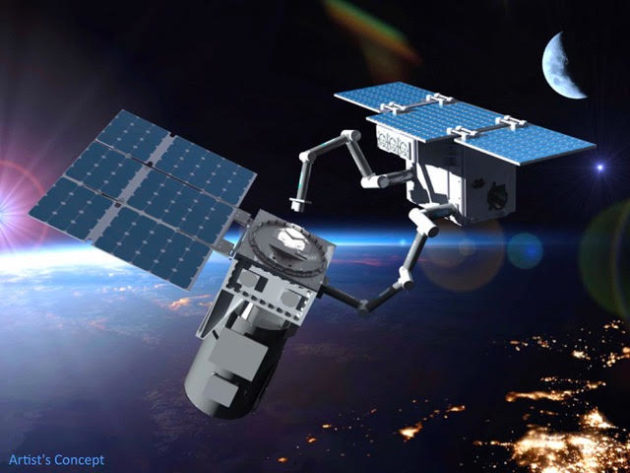 Other technologies for LEO Knight are already complete. Tethers Unlimited has its own “Swift” brand of software-defined radios that can control and monitor robotic space operations, Hoyt said. The company’s Hydros thrusters, which split water into hydrogen and oxygen for the use as fuel, are also ready. Hoyt said Tethers Unlimited supplied three Hydros thrusters to Millenium Space Systems, and has more than half a dozen Swift radios in orbit on satellites, including Harris Corp.’s first small satellite, an experimental six-unit cubesat called Harris Satellite, or HSAT, that launched in November aboard on an Indian PSLV rocket. Hoyt said it’s only been within the past year that Tethers Unlimited’s plan for LEO Knight came together. One factor that still needs firming up is the market, however.

Many satellites built for low Earth orbit aren’t designed to last very long, and servicers under development – Northrop Grumman’s Mission Extension Vehicles and Effective Space’s Space Drones – have anchor customers with satellites in geostationary orbit. LEO Knight’s first use could be with a fleet of satellites built on Tethers Unlimited HyperBus cubesat platforms, he said. Refueling those spacecraft would enable new “high-value missions that are not feasible or affordable using heritage satellite architectures,” he said, though he declined to say what those missions are. “We believe we have identified at least one high-value mission that is enabled by the refueling service, and it is one we are well positioned to pursue with the Swift [software-defined radio] technologies we’ve been developing,” he said.

Hoyt said LEO Knight is being designed for mid-to-low-altitude missions in sun-synchronous orbit – a common destination for remote sensing satellites. He added, though, that the servicers will be able to reach up to 1,200 kilometers, which would include orbits of large internet constellations from SpaceX, OneWeb and Telesat.